I am very glad and proud that John also became a follower of my blog, welcome on board, John!
Excited that the 3 miniaturists who's work and personality I admire and like so much are now all 3 followers of my blog.
A big thank you, guys!!  this is really motivating!

Today I finished the sketch for the cupboard or in fancy french the dressoir, whatever you like to call it.
Tomorrow I will probably cut some of the veneer; my plan is to work on the top first, it's a design with bands, a swirl, flowers and leaves, so I'm keeping my fingers crossed that all goes well AND that I don't cut any fingers off in the process ;).
I hope to have enough time to work on it this upcoming week, if so I will post a first photo towards the  weekend.


Speaking of weekend... hope you have a great weekend! 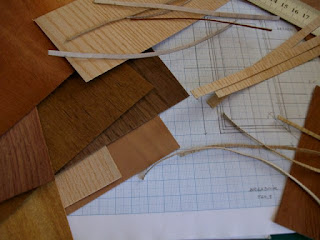 After looking at and reading sites (and blogs and forums) about dollhouses worldwide for about 15 years now, this last year I narrowed it down to three blogs.
Three blogs of men who are in my opinion the three best at this moment, I consider them artisans and
they will no doubt have a great future in the miniature world, for as far as they did not reach that yet.

Mulvany & Rogers, eat your heart out...

The first blog is Merriman Park. http://www.john-merrimanpark@blogspot.com/
Have a look at Johns' beautiful entrance hall and the gorgeous drawing room, for instance.
I will not force my opinion, but....come on.... isn't that just fab!??
Merriman Park is fun to read and always makes me smile.
Be prepared to be amazed.

Next there is Giac's blog. http://www.englishmanordollhouse.blogspot.com/
Make sure you see the beautiful scullery and staircase, to name just two, and feast your eyes.
Giac is building a gigantic manor, lots of how-to's on the way, and the result of his work
is stunning.
Don't be a stranger and read that blog.

Then there is Ray's blog. http://www.modernminiatures-whitledge-burgess.blogspot.com/
You simply have to see Ray's staircase which made me drool and he also makes the most exquisite
kitchens. And more!
Ray too is sharing how-to's, so important for those of us who want to learn new stuff.
Read, learn and enjoy.

Tonight I was searching the internet for houses that I could put on my wishlist to see if I ever get the opportunity.
I came across this link:

A Visit to Dennis Severs' House

At the time of writing this it is two weeks since my twilight visit to Dennis Severs' House at 18 Folgate Street in Spitalfields. Yet I can still see and smell so much of the house which makes me think perhaps I did manage to glean something from an experience that felt like no other.
The game is that you enter the house as if you have interrupted the lives of the Jervis family, early 18th century Huguenot silk weavers who were in mid-meal when a time-traveller from centuries hence crept into their house having paid £14 for a good look around. Dennis Severs was 'an artist who used his visitors' imaginations as the canvas' and who apparently lived in the house until his death 1999 in much the same way as the original occupants might have done in the 1720s. I can vouch for the fact that a visit is a truly memorable and extraordinary encounter. If the intention is to have passed through the surface of a painting then I most definitely did my best.
No photography is allowed inside the house and this feels right. To have been distracted by my camera would have felt completely wrong, as would have been any reproduction of those pictures here...I needed to see it and feel it, smell it and hear it all and let that leave an impression on my imagination which it most certainly has.
My visit started at 6.15 pm with a brief introductory talk outside from the curator who asks that I remain silent, no talking and definitely no mobile phones, thus making for a visit of complete concentration. I did make some notes and interestingly the notes revealed something afterwards of which I may have been unware at the time.
You don't need to to be able to read what I wrote...but just look at pages one and two... and compare with pages five and six... The whole house is candlelit, but to varying degrees and when the visit starts down in the kitchens, in the cellar, the crowded table laden with food and manuscripts, the delft tiles around the sink and the range glowing and radiating warmth from a real fire, with the freshly baked scones on the griddle, are all just barely visible to the eye. This is 18th century light and with the ceiling a scant three inches above my head below stairs, as I moved on through the house and through time, (because the final room brings the visitor into the 19th century) that light had gradually increased, but in a way that I might have missed but for my notebook.
This is still-life drama, the chance to become lost in another time, and not so much what you see as what you imagine too, and little signs and notes constantly upbraid the lazy visitor...


'You either see it or you don't...you are looking at the thing rather than what the things are doing...'

and a few rooms later another reminder...


'What! You are still looking at 'things' instead of what 'things' are doing...'


'Would you recognise art if it fell out of a frame...'

and suitably chastened I vowed to try harder.
There are bells peeling and footsteps, the floor creaks and the clocks tick and chime and then you catch background whispering which had me looking over my shoulder and about to say 'Shh' to other visitors who must have been talking ...except they were about to say the same to me, and it dawns that this is the family who have just left. As you approach they depart, as you depart they re-enter. Then a voice off-stage says ...


'Rebecca, we'll need more fuel in the morning, keep an eye out for someone peddling it on the street..'

And a very unnerving moment when I coughed and so did the invisible resident... I'm telling myself that was a coincidence.
The smells were a heady mix of ginger and spices various and coming as a consistent and gentle reminder to use all my senses as I then heard a baby cry and bird song, and noticed the wig on the chair and upstairs in the withdrawing room, the half-toasted waffle still on the fork, the broken tea cup perhaps knocked over by the ladies of the house wearing their large hooped dresses. The sewing basket lay open, the music cast to one side..they had been singing 'Mrs Spriggs Gave Parties' just before I walked in it would seem, the little house of cards behind the chair...perhaps that was the children.
And I desperately wanted to sit down and watch and listen to what my imagination was telling me, but of course that wasn't allowed. I was a bird of passage not a resident.
Up into the bedrooms and an imprint in the cushion in the window seat...someone had seen me approaching and disappeared... leaving behind a full chamber pot I hasten to add which I decided not to sniff. I moved on up to the attics and clearly a time of poverty has descended on the family. The light was stark, the air noticeably cooler, the fire a mere flicker in the grate though still real, and everything much grimier, crumbling lathe and plaster giving way to gaping holes in the ceilings, washing hanging on the landing, the rugs rumpled enough to snag my feet on and make me look down, a plate of oyster shells on the table perhaps not the luxury food then that we view it as now, and in the background gunfire. At this point I knew that explanations would follow if I looked hard enough and sure enough this is 1837, the King has died a new young Queen is about to ascend the throne.
The final room back downstairs and a Victorian parlour crammed to the gunwhales with all that wonderful Victorian clutter, the smell and the light different again and I realised this was the oil lamps.
I did a great deal of standing and staring which is built into and an acceptable aspect of the visit during which you are never made to feel rushed or hurried, if you go to walk into a room, or approach a stair case having missed a room, someone just silently stands in your way. In fact everyone was overtaking me but my imagination wanted its moneysworth and most certainly got it.
As I emerged blinking back into the 21st century I did have that sense of the disorientation of time travel were it possible, with every inch of my imagination out on stalks and working overtime as I walked back along Folgate Street.... and then around Spitalfields where so many of the old buildings remain and signs of a bygone era are in constant evidence.. until in creeps the 21st century with quirks of its own.. I even managed to preserve that imagination through a journey on the tube back to Bloomsbury and into the next day and a visit to Sir John Soane's Museum, more of which soon.
But if you are in London please don't miss a visit to Dennis Severs' House, it really is magical.

All content on http://gees-place.blogspot.com/ is copyrighted and may not be reproduced in part or in whole. It takes a lot of time and effort to write and photograph for my blog. Please ask permission before reproducing any of my content.

Gee
I live in the south of the Netherlands,along with my fantastic family and the 2 most amazing cats on the face of this planet. Interested in miniatures for about 15 yrs. now, my favorites being rococo style miniatures. intrigued by craftmanship, fascinated by beauty, appreciate perseverance. I lack several lives to make everything I'd like to make, be the persons 'd want to be, learn what I'd like to learn.