Dear Readers,
Wishing you all a healthy, happy, peaceful and inspirational 2017.
Hoping this year will bring out the best in you! 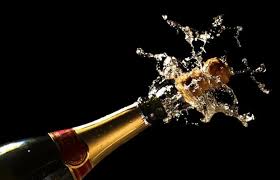 it will be Christmas soon,
don't you forget to hang your Xmas stocking...

I already hang mine: :D 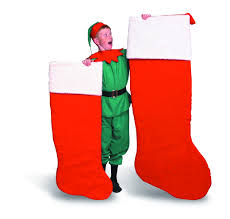 Wishing y'all a wonderful Christmas!!

Let's spice things up (a how-to)

Hope you are all doing well and enjoying the sunshine.
Today I have been doing something I read about somewhere on the internet (but forgot where) and
thought I'd share it with you.
So this tutorial is not mine to begin with.
But thought it is nice enough to share.
note: if this tutorial is yours, please send me an email saying it is and I will add your name to it.

The strangest thoughts can present itself to you and another mini idea is born.
For instance, I was thinking today that I really should get to ironing more often, ironing the laundry today took me forever, it seemed.
I felt a bit "rusty".

And "plop", it popped right into my head, the article I had read about making miniatures look rusty.

I forgot to make a 'before'-picture, but you can use it on whatever you want, so that does not really matter.

So I collected some stuff I wanted to give a rusty look: a firescreen and firegrate, a doormat, and a footwarmer I bought from Arjen Spinhoven (they are MDF I believe, lasercut), a green metal wire chair from Silly Sisters, and window grates I purchased from Artofmini.com (laser cut from MDF I believe). Also I worked on some sort of aluminium (?) thing I once picked up at some fair.And a piece of plastic fencing.

OK, here we go:
First I painted everything with Van Dijck brown acrylic paint, not too neat.
I did not mix the paint with water, or, well, maybe a tiny drop.
Oh, important: I used an old brush that can be disposed of afterwards. A size 2 so all the
little nooks are accessible.
Let dry. 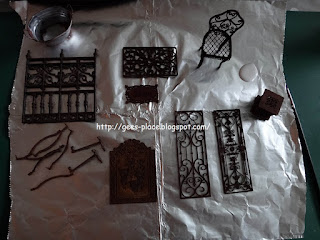 I had cleaned the brush, put some tacky glue on the aluminium foil and ...here it comes....
some cinnamon in a plastic container.
The next step is to add some glue here and there, very thin, to the places you would like to see rusted.
You can look up pictures on the internet for realism.
Just use a tiny amount, don't put the glue on too thick and work FAST.
Work in small segments. Before your glue is dry dip the brush in the cinnamon and dab the cinnamon onto the pre-glued areas.
After that a soft tap on the table proved a great way to remove excess  cinnamon.
Let dry thoroughly.
You can remove too much glue and cinnamon when the glue is still wet ,carefully,  with a toothpick.
You will notice that your brush gets clotted with cinnamon and glue quite quick, so in between the cinnamon procedures I cleaned my brush in some luke-warm water a couple of times,
after which I dried the brush on a tissue.

When finished and dried I brushed each  piece with a fan shaped brush very light to remove any loose cinnamon leftover. 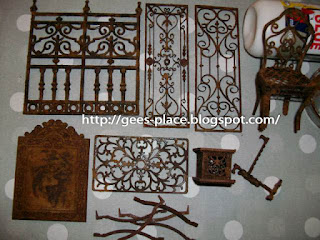 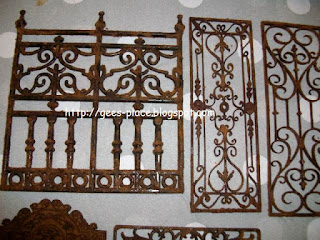 I like to do easy tuts, I'm not the rocket science type :).
Hope this little tut was clear enough.
Thanks for your time.
Enjoy whatever you do and a  big hug to you all,

Hello Gorgeous People With Great Taste :)
A quick update: still working on the flowers & leafs, progress is slow because every flower gets several paints; taking in consideration that the paint has to be dry before I do anther layer AND I'm only working on it when there is leftover time between daily -things-I-just-have-to-do-allthough-I-would-rather-just-do-the-mini.

Several flowers and leafs are already finished.
I'm not going to show you every flower that is finished, IMHO that is soooo boring....but I will show you the endresult of course.
However, still have to make quite some flowers/leafs to make a full bouquet, perhaps not every flower I make will make it to the bouquet, we'll see what looks best.

Well, you are informed, have a fantastic weeekend,
Hugs,
Gee

Hi All,
Hope you are all just fine :)

As for me, I am trying my luck in making flowers.
Fiddling about with paper and paint.
Picture a big bouquet. Like in an old painting.
Fresh flowers but also dead ones.
That's the idea. No idea if I will succeed in that but it never hurts to try.

This is what I've done so far; made some dead/nearly dead roses. it still needs a lot of work, I want to add thorns as well as some buds. The leaves look far too alive, too.
Not nearly finished! 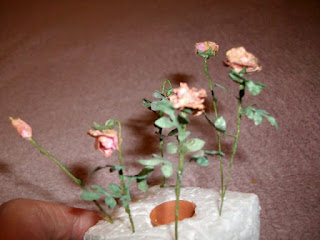 Maybe I was somewhat overenthousiastic with the idea, 'cos here you can see some
kits I've ordered and still have to make.
As you can see I have my work cut out for me ;). 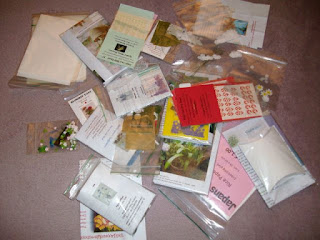 Also purchased some new silks in the UK.
I love the greens, though I don't have a clue yet what I am going to use them for,
But well, it is always nice to have several options open. 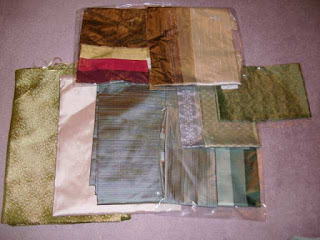 It just came to mind that I can't recall telling you about the fair in Ulf my daughter and I
attended.
Should have made pictures of the minis I dragged home but totally forgot to make them.
Never mind, it eventually will come across in several posts, it's no secret and if it was, can't keep a secret anywayz ;)


Wishing you all a very merry Christmas!
Hugs,
Gee

Again it has been far too long since we've had a talk.

I do hope you all are fine and have managed to remain doing your business instead
of your mind wandering off thinking  about what my next post will be. lol.
Well, pumpkins, no need to suffer any longer ;) for here it is!

First I have to fill you in on what happened before, so here we go:
one of my very early memories of winter eve's is the sound of my Mom's knitting needles
going on high speed to knit one of us kids a warm sweater.
Knitterdeknitknitterdeknitterdeknitterknit... that sound went on and on and on.
She knitted on very small steel needles in an olympic tempo.
Moms could way back then.
While she knitted she'd watch some show or the news on television and could have a
conversation about anything.

I have also knitted some sweaters, when I was at the age of uhm... let's say that was years and years later; no need to harm your little souls with numbers ;))
Anyway, I knit on needles size 10 with big chunky yarns
and the sound of my knitting goes something like knit....wait for it.....knit....wait some more
...knit....darn I've dropped a stitch.
I can't even have a two-word talk when knitting, let alone watch the news.
But I've always wanted to be a fast knitter and preferably keeping all the stitches up, too.

Also I've always loved the look of lace knitting.
The only thing being... what to knit and could I pull it off??
I'm not actually going to wear anything like that, so when the mini hobby came along
this was an opportunity not to neglect.

I decided it had to be a bedspread or something like that and the patterns had to be 18th century-ish at least. Because I never did laceknitting before, the first thing to do was knitting a real life sized bedspread on needles size 10, to practice and so I did.
The finished  thing measures 3 metres by approx. 3 metres and then I felt ready for smaller needles.
Had to start over 4 or 5 times but I did make a baby blanket as well as a bedspread.
Of course I was not able to refind the picture I've made of the lifesize thing, but I"ll
show you the minis.

For the bedspread and the babyblanket I've used real 18th century patterns.
While I am fully aware of the fact that there are people who arrange and style what they
make picture-perfect, there is no danger of encountering that kind of behaviour on this
blog, I know you can see beyond blurry pics and not so neatly dressed stuff, so here it is: 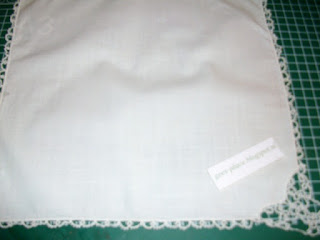 I use this handkerchief as a bedsheet, it belonged to my grandmother.
I noticed the edging and the corner were done by tatting.
The tatting work is so fine I could not get it clear on the picture.
My grandmother made this edging more than a hundred years ago; maybe the
handkerchief was her mothers'and she got hold of it the way I did.
Although the handkerchief yellowed a bit over time, I'm not going to use any bleech on it.
Another family item to go in the minihouse.

Let's see, what's next...  here's a picture of the babyblanket: 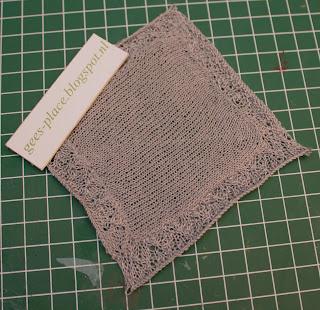 and pictures of the bedspread: 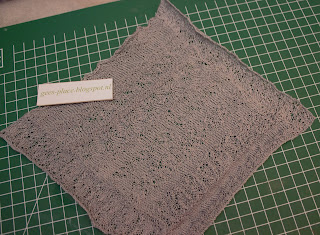 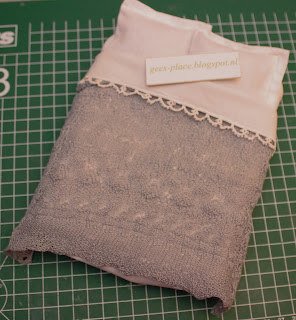 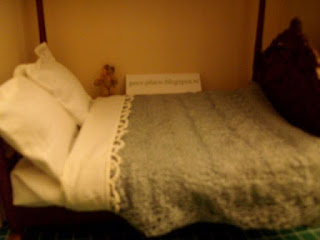 and finally on the bed. the picture is blurry but you get the idea.

I have very much enjoyed reading your blogs, please keep the posts coming.
It is a bit early but I do hope you will all have a lovely Christmas!

All content on http://gees-place.blogspot.com/ is copyrighted and may not be reproduced in part or in whole. It takes a lot of time and effort to write and photograph for my blog. Please ask permission before reproducing any of my content.

Gee
I live in the south of the Netherlands,along with my fantastic family and the 2 most amazing cats on the face of this planet. Interested in miniatures for about 15 yrs. now, my favorites being rococo style miniatures. intrigued by craftmanship, fascinated by beauty, appreciate perseverance. I lack several lives to make everything I'd like to make, be the persons 'd want to be, learn what I'd like to learn.